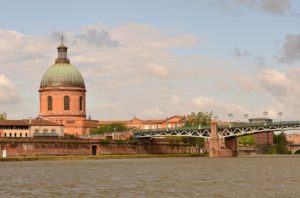 Toulouse, located in the beautiful South-West of France, is the capital of both the Haute-Garonne French department and the Occitanie, the administrative region of France.

The city is the 4th largest in the country with an estimated population of 996,644 in 2018.  If you’re thinking of moving to Toulouse, or already live there, check out our blog to get to know the city better!

A bit about Toulouse:

The city is known as ‘La Ville Rose’ or pink city due to its buildings being modelled with terracotta bricks, making the majority of its architecture the colour pink.  Nevertheless, there are also parts in town where everything is violet. This is because Toulouse is also the City of Violets.

The architecture within Toulouse represents the history remained from the Renaissance, viewable in buildings such as the Hôtel de Bernuy and the Hôtel d’Assézat.  The city centre has been preserved so well that it has maintained the feeling of exploring a village rather than being in one of the largest urban cities in France.  Something very unusual nowadays, as urban areas become modernised and dissolve all the remaining history. 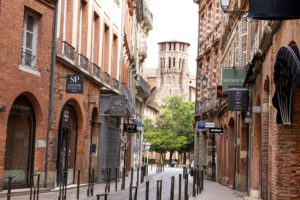 Living in another country can be difficult at first.  Moving to France is no exception. Nevertheless, the residents in Toulouse are known to be welcoming and friendly, which is a plus.  Moreover, the environment itself beats Paris with the warm climate and cheaper prices!

InterNations is an online platform for expats to contribute with different tips for people moving to Toulouse.  A place where you can meet new people and enjoy their hosted events all year long!

Meetup is another expat society, who also share tips about living in the city and hosts events every fortnight.  They also have the option of planning the events yourself. So if you want to do something in particular, don’t be shy and see who is up for it!

Moving to a different country or city, means leaving behind your essential resources.  Not to worry, in Toulouse there are various English-speaking firms that can help you. Such as:

Restaurants recommended by the Michelin Guide:

Known for its country-side French cuisine, Toulouse has delicious food they are famous for, such as cassoulets, duck confits and the Toulouse sausages.  There are numerous Michelin Guide restaurants in the city with traditional French cuisine. For instance:

As for wine, Toulouse has a very delicious variety coming from vineyards such as Languedoc-Roussillon, Saint Emilion and Entre-deux-Mers.  The N°5 Wine Bar, located on 5 Rue de la Bourse near the Place du Capitole, has been named the Best Wine Bar in the World in 2017 and 2018.  So they must have lovely wine!

If you fancy a nice beer in an English pub, The Frog & Rosbif is the place for you.  Also a great pub to watch a match and grab a burger! The name derived from the Brits calling the French Frogs (because they eat frogs).  While the French call the Brits Rosbif (as they eat roast beef).

Due to the city’s rich culture and architecture, there are so many places to see.  Here are only a few of numerous areas to visit: 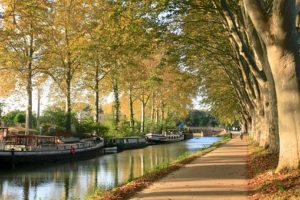 The city is also very passionate about their sports.  The Stadium Municipal de Toulouse is the grandest stadium in the city.  Various events are hosted there but it is mainly home to the football team, Toulouse FC who compete in the Ligue 1.  As well as the rugby team, Stade Toulousain also known as ‘Les Rouges et Noirs’, who are also rated among the most successful clubs in Europe.

To enjoy the atmosphere of a French match, either football or rugby, this is the perfect place to do so.  Nevertheless, if you don’t get a ticket to a game, you can also experience the ambience in a bar nearby.

Furthermore, the country celebrates multiple events throughout the year that you should enjoy:

Other events are also celebrated to honour French gastronomy such as Tous au Restaurant and The French Cuisine Festival.  To honour France’s heritage and nature, for instance European Heritage Days and The Mountain Festival.

If you are moving to Toulouse or already living there. Harrison Brook can assist you with your financial needs. We offer:

Contact us now and find out how we can help you.